Mistress Sara likes is someone who does not say much. She likes to make herself clear when she talks and she leaves the rest to the person she is talking to. When she spoke to this loser today, she gave him clear instructions. But he did not do what he had been instructed. So she punished him for that and she degraded him by making him drink the spit she put in plastic cups.

Lady Betty and her friend lady Bertie caught the guy who had been spreading rumors about them. They wanted to send a message to him that they would not tolerate his nonsense. They also wanted him to not only stop spreading rumors, but to own up to them and set the record straight. They spat on him and into his mouth and were prepared to do worse to him when he agreed to do what they asked.

Lady Levanas teaches guy a lesson by spitting on him

Lady Levanas is not the kind of person to piss off and get away with it as this guy learned. She took him aside and she made him sit down. She took out one of her high heels and she spat on the sole as he watched. She then gave it to him and told him to lick it. He hesitated and she told him she would do something even worse if he did not. He did. 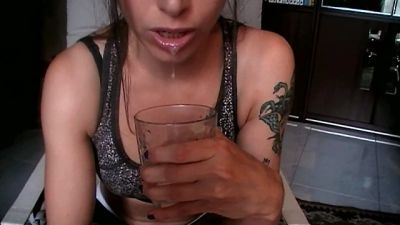