Madame Marissa enjoys spitting. And she also likes to use her spit to humiliate losers. But today she also had another trick up her sleeve. She wanted her slave to swallow her spit but she also used him as her human ashtray. It was humiliating but at the same time it was painful and that is how she wanted it. The slave had to endure it all since there was nothing he could do.

When this mistress learned that it was this loser who had told on her, she was pissed. She did not imagine he was a snitch so she humiliated him. She had done something to lure out a snitch in her midst and now she knew who he was. She used her spit to humiliate him and make him feel like a loser. She forced him to lick and swallow her spit. 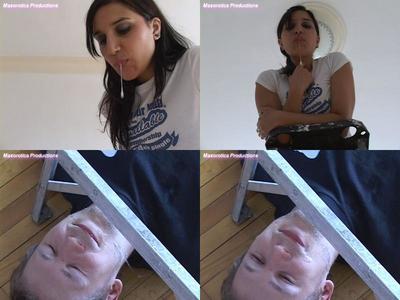 This mistress enjoys spitting on anything and everything she can lay her hands on. She does it because it is a lot of fun for her and it disgusts other people. Today she decided to spit on the soles of her high heels. She then gave the heel to her assistant to lick it. He had pissed her and she wanted to use her spit to punish him for what he had done.

This mistress is a hot one. She knows it and she likes to make money using the fact that she is hot and naughty. Guys pay to go and experience kinky stuff from her. It is wild and unpredictable. There is no knowing what she will or will not do. It all depends on her. Today she felt like spitting on the guy so she made him open his mouth and she spat into it.

This mistress caught this mistress stalking her. She told her she was not a lesbian but she did not seem to understand what she told him. She had had enough so she invited to her house and the stalker thought she had finally won. But when she went there, she was tortured and made to lick the mistress' spit from the soles of her boots. And then she was trampled.

Lady Berty could not believe what she had found in her slave's room. She had found her lost stuff. She had asked him but he claimed he did not know and he looked so innocent she believed him. But he was the thief. She punished him cruelly by trampling him and also spitting on him to express her disgust. She trampled him painfully. She even blew smoke in his face.

Madame Marissa did not like the food her slave had cooked. She wanted him to learn to cook better and she had told him to try recipes but he did not do it. She was pissed that she had to remind him all the time. She was the one suffering by eating poorly made food and so she punished him to make him learn. She spat into his mouth and told him she would do it till he learned to cook.

Mistress Gaia took her slave to her torture chambers and she taught her a cruel lesson. She made her learn what she was made of. She tied a leash to her neck and she pulled it hard to choke her. She also used it to drag her around and make her do what she wanted. She forced him to open his mouth and she spat into it and forced him to swallow it.

Mistress Jana was dying to try spit fetish. She rented a slave and she forced him to lick her spit. She wanted to try it on him so as to know whether it was something she wanted to keep doing and if she should get her own slave. She had a lot of fun making him lick the saliva off the soles of her shoes and she decided to get her own slave.

This tattooed mistress does not condone nonsense from anyone least of all from a slave. She punished him using her spit for his nonsense and made him cry like a little baby. She made him lick her feet from her feet. She had spat on a plate and stepped on it with her feet then she forced him to lick the spit off her shoes and he had to do it.