Sue is a mistress that cherishes loyalty. Her slave betrayed her and she could have none of it. He did not know that she knew. She played cool and cornered him and beat the crap out of him. She slapped him, she kicked him and she even trampled him with her sneakers. She then spit on him and made him lick and swallow her spit as he begged her for mercy.

Lady Emerald is a chain smoker. But with the smoke comes phlegm as well as lots of saliva to spit. She does not mind this because she knows it is one of those ways she humiliates and punishes her slave. Anytime the slave messes up, she spits into his mouth and she forces the slave to lick the saliva and swallow it. She sometimes uses the slave as an ashtray.

Princess Smileys wanted to make sure that her slave does not forget who is boss in that house. She made the slave lie down and she tied a leash on his neck. She had a cane in hand should he not do whatever she wanted. He was naked so she knew the cane would hurt if she decided to use it. She then spit in his mouth and made him swallow it. 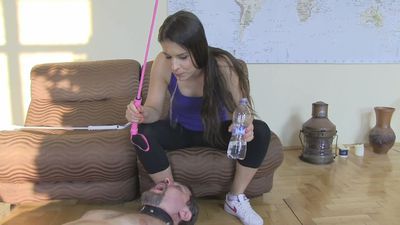 Mistress gets feet licked and rubbed

This mistress enjoys a foot rub as well as a foot licking. She has a foot fetish but she also has a spit fetish. She likes to combine the two. She likes to have a slave rub her feet and after he is done, she likes to spit on her feet and then make him lick them. The slave has no option but to do all she asks or the punishment would be severe.

After chewing her gum, mistress Adonia spit it out on the floor. She did the same to two other gums and finally decided to spit on them. She made sure they were surrounded by spit. Then she called her slave and made him lick the saliva and chew the gums. She did not care whether it was not sanitary to do that. She had given an order and it was to be followed.

Niki spits on her weak boyfriend

Denise tramples and spit on slave

Denise enjoys trampling slaves. Her slave is used to her tramples because she does them to him often. She had a trick up her sleeves that he did not know about. So she made him lie down and as usual she trampled him before she made him open his mouth. She then spit into it and forced him to swallow her spit. He was disgusted and degraded but obeyed her order.

Goddess January wanted to show her displeasure to finding her boyfriend flirting with another girl. She called him to where she was brushing her teeth and made him open his mouth and she spit into his mouth. She did this repeatedly because she wanted to humiliate him and punish him for what he did and send a clear and strong message that she will not tolerate such behavior ever again.

Madame Marissa enjoys being cruel. She likes to do disgusting things because it brings her joy and fun and at the same time, it inflicts misery on her slave. She made sure she had stepped on food in the kitchen with her high heels and mixed it with her spit before she made her slave lick it and eat it from the floor and from the soles of her heels.

Sibilla and Angel spit on slave

Sibilla and Angel wanted to punish this slave for not following the instructions they gave him. He thought that the mistresses were joking but they were not. They humiliated him by spitting into his mouth. They forced him to open his mouth and then had fun spitting into it. He had no option but to swallow the spit or they would have a worse punishment for him and he did not want that.